Deputy Minister for Environment and Energy of the Hellenic Republic 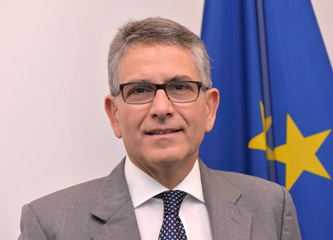 Deputy Minister for Environment and Energy of the Hellenic Republic

Gerassimos Thomas is Deputy Minister of  Environment and Energy in Charge of Energy and Natural Resources of the Greek Government.

Prior to his current assignment G. Thomas had professional assignments as: Deputy Director General in the Directorate-General for Energy at the European Commission and Chairman of the Steering Board of the European Fund for Strategic Investments EFSI (2014-2019); Director Finance at DG ECFIN (2009-2014); member of the EIB and EIF Board of Directors (2009-2017); Head of cabinet of Joaquin Almunia, Commissioner for Economic and Monetary Affairs (2005-2009); Deputy Spokesman for Commission President Romano Prodi; Spokesman for economic and monetary affairs under Commissioner Pedro Solbes (2000-2004).