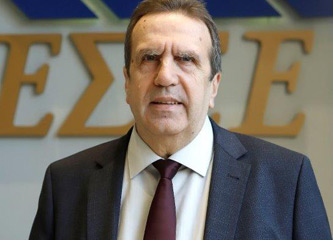 George Karanikas was born in Edessa in 1956. He studied Business Administration and Marketing.

He was first elected to the Board of Directors of the Hellenic Confederation of Commerce and Entrepreneurship in 2006 and he was nominated for and subsequently assumed the position of the Vice President.

He also served as the Secretary General of the Hellenic Confederation of Commerce and Entrepreneurship (ESEE) from 2009 to 2018 when he was elected President of ESEE, a position he holds since November 2018.

Additionally, he is the Vice-President of the Economic and Social Council of Greece (ESC) and a member of the Board of Directors of the Manpower Employment Organization (OAED).

Currently, he is a business consultant and owner of a retail cosmetics store.