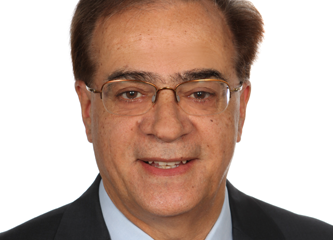 Gikas A. Hardouvelis is Professor of Finance and Economics in the Department of Banking and Financial Management of the University of Piraeus in Greece. He has a Ph.D. in Economics from U. C. Berkeley, and M. Sc. & B. A. degrees in Applied Mathematics from Harvard University.  His academic work is in the areas of Macroeconomics, Monetary Policy and Finance and has been published in the AER, QJE, J. Finance, RFS and other academic journals.

He is currently the Senior Independent Director of the National Bank of Greece (NBG) and a Member of the Board of Directors and of the Executive Committee of the Foundation for the Economic & Industrial Research in Greece (IOBE). He is also a Research Fellow at CEPR in London, a Member of the Board of the Multinational Finance Society and a member of the Academic Council of the Cyprus International Institute of Management.

He has served as Research Adviser to the (central) Bank of Greece and to the Federal Reserve Bank of New York.  He was also the Chief Economist of NBG and, later, of Eurobank as well as the President of the Scientific Council  of the Hellenic Bank Association.  He was a founding member of the Board of Directors of the Athens Derivatives Exchange and helped its creation.

Hardouvelis has served twice as the Director of the Prime Minister’s Economic Office of the Hellenic Republic under two different prime ministers, plus as the Minister of Finance from June 2014 to January 2015.