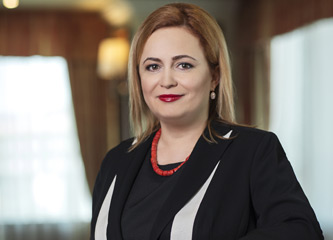 Currently Mrs. Georgieva is appointed Executive Officer in ICGB AD (the IGB Project), where she is also member of the BoD. She is responsible for the overall management and development of the Gas Interconnector between Greece and Bulgaria.

From 2012 up to 2014 Mrs. Georgieva was Managing Director of Nabucco pipeline Bulgaria where she successfully oversaw and directed company compliance and corporate governance Project and Risk Management activities. During this period key deliverables and permits were obtained as well as overall progress of the project in Bulgaria.

Mrs. Georgieva has 13 years of experience at OMV, 8 of which as Managing Director. Also she has been Regional Finance & Service Manager. Mrs. Georgieva represented OMV BG externally and successfully promoted the image of the company and positioned OMV Bulgaria as 5th company in Bulgaria regarding turnover performance and within OMV group for good social responsibility.

Teodora Georgieva is a graduate of the University of National and World Economy in Sofia, Bulgaria. She holds a Master’s degree in Finance. She was awarded “Manager of the year” and honorable nomination of the “Best tenth Bulgarian Managers” of the year 2009 and 2010. Mrs. Georgieva is also Coordinator in Bulgaria at European Round Table of Industrialists.